An award-winning playwright and former contributor to the Visual Thesaurus Teachers at Work department, Shannon Reed is an MFA candidate in Creative Writing at the University of Pittsburgh, where she also teaches. Read more about her work at shannonreed.org. Click here to read more articles by Shannon Reed.

Keep it up Shannon. I will be a teacher in near future and it seems like you were godsend to help me out. Your articles are going to be introducing me to variety of literature, which I truly love, so I can pick my likely favorite plays and authors!
Honestly, I was just thinking of that exchange between Emily and her mother the other day. Pretty enough for all normal purposes. I've always thought that was one of the funniest, most thought provoking comments I've ever heard. It's still funny.

So, tell us more about the Simon Stimson character! Very intriguing. I'm not teaching at the moment but hope to return to it next year.
G'day: Summer was a secret here in Washington. Someone please help with a question; I have (1958)a minor in English but--if you can believe this--never learned the parts of speech nor how to parse a sentence. Yet I published widely during my university teaching years. So, the question: A sentence begins,"For we know that if our earthly house..." and goes on to talk about one's body. Now I concluded that the word, "For", was a synonym for "because" and in the manuscrupt I am writing I described "For" as a conjunctive word to connect parts in a train of thought. Please advise. Thanks. e.c.
My theory, based on nothing but reading the play over and over and over, is that Simon Stimson is a closeted gay man. He seems to be more artistic (he has that lovely line about letting the hymn flow), and more angry about his lot in life, than most of the people in the town. I think that's the reason that one of the other characters (I'm sorry, but I've forgotten which... I think Doc Gibbs) says, regarding Simon, "Some people just aren't cut out for small town life." There's something about that that is dry-eyed but compassionate, and I wonder if Thornton Wilder didn't hear it or say it about himself. Remember, Wilder was in the closet himself, falling madly in love with several men who were married, and living in small New England towns as a teacher. He clearly loved small town America, but I wonder if he wasn't also longing for a parallel existence where he could have been more of who he really was. That's the theory!
Okay, now I'm curious to go back and re-read this play. Thanks! I'd forgotten that the Matchmaker became Hello, Dolly! too. I bet you're right about Wilder's inner longing for a bigger worldview. Our Town always intrigued me and I've seen several school productions, but I really wish I'd seen Spaulding Gray's portrayal of the Stage Manager.
If I am not mistaken (and I may be), there is a video/DVD of Spaulding Gray's performance. Not nearly the same as seeing it live, of course, but it's something.
This look back to high school via Our Town made me wish I had a teacher who might have pointed out the wiser meanings behind some of the dialogue mindlessly recited in the school play. I didn't delve into it in any depth on my own. I doubt I would have known how. My recall is that it was a rather dull play/story based on a young girl in a small town who died too young. I hope all current or soon-to-be teachers will read your column and recognize the need to help students see beyond the words into the true meaning the writer intended. I enjoyed my 16 year-old version of the play as "good" and I have remembered it when much else of high school has been forgotten. Thanks for the insights that even in my 70's I can appreciate. Pass it on.
My daughter appeared in a local theatre production of Our Town in a New Hampshire town not far from Peterborough (the inspiration for Grovers Corners). She was 13 and played Rebecca Gibbs.

The play was performed in the upstairs theatre area of an historic building, once the Town Hall, and there was something special about the quiet darkness of the building during the final week of rehearsals. I could feel the presence of long-dead New Hampshire folk and the events playing out on stage felt like they were happening in the present. I think the audience felt it, too, in the actual performances. There was plenty of laughter, and you could hear a pin drop during the cemetery scenes. Some of the action took place in the audience, a great way to involve everyone.

The local actor who played Simon Stimson was, in fact, gay, as was the director (who may well have shared your theory). The choir rehearsal scene in this production was special - Simon represented the dark side of small town life.

The mix of actors, young and old, were very comfortable with the language, maybe because there are still plenty of plainspoken New Englanders.

I have always loved this play since it feels like it belongs to my hometown. A TV production (in which Spaulding Gray played the stage manager) was one of the best I've ever seen, but this local theatre production is close to my heart.

Thanks for a piece that I really enjoyed reading.
I'm not a teacher but read this introduction to Wilder's Our Town with interest and delight. Thank you. I look forward to reading more of these "teachers at work" columns and shall consider myself blessed to have such a teacher.
Thornton Wilder has been able to capture the hearts of readers and actors with his deceptively simple stories about people who would not seem to demand any attention.
I find it amazing that in today's superhyped world of celebrity and technology his community of Grovers Corners still grips the heart of those who travel there.
Does anyone but me remember the television production of Our Town back in the fifties that had songs added and Frank Sinatra as the Stage Manager? The only song that seems to have endured from it is the quirky Love and Marriage that became the theme song for a TV comedy. One song that I remember is the lovely ballad Young and Impatient Years.
Does this production exist on DVD? I'd love to see it again. I think that a very young Paul Newman played the juvenle lead. If anyone out there can help me locate it I would be extremely gateful. 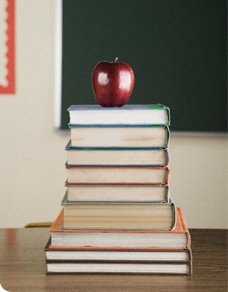 How to Encourage Summer Reading
July 16, 2014
Fifteen Ways of Looking at "The Woods": Jumpstarting Poetry in the Classroom
July 23, 2013 - 4 Comments

About Us Become an Affiliate Technology Licensing Contributors Contact Us Copyright ©1998-2021 Thinkmap, Inc. All Rights Reserved. Terms of Use
Already a Subscriber?